Originally published in The Lahaina News – April 11, 2019 – On March 27-28, West Side resident Jennifer Potter attended the sixth annual Hawaii Energy Conference (HEC) and Exhibition at the Maui Arts & Cultural Center in her role as commissioner on the Hawaii Public Utilities Commission (PUC). 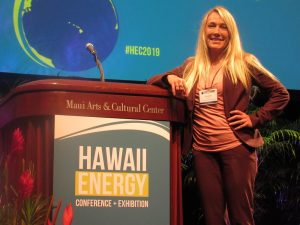 Commissioner Potter was appointed to the PUC by Gov. David Ige in March 2018 for a term to expire in June 2024. Previously, she was a faculty member at the Hawaii Natural Energy Institute, an independent research institute within the University of Hawaii, where she conducted research on demand response, Distributed Energy Resources (DERs), locational benefits of DERs, and energy efficiency.

Potter holds a Master’s Degree of Science in Public Policy and Management from Carnegie Mellon University and a Bachelor’s Degree in International Studies and Economics from Southern Oregon University.

Commissioner Potter became “hooked on energy” when she started working for a small electric utility in Northern California directly after graduate school.

“I analyzed how and when customers used energy,” she said. “This research was called load research and is the foundation for setting rates, forecasting load growth and sales within utilities around the country. It provides a thorough and reliable knowledge of trends and general behavior of the load characteristics of the customers serviced by the electrical industry.”

Becoming intrigued with how customer demand drives utility generation and supply, Commissioner Potter’s direction became crystal clear: customers are the main actor in the clean energy future, and when they use energy is critical.

“If customers use less energy in the evening hours when energy is generated from dirty fossil fuel plants, and instead use most of their energy during the day when solar is abundant and powering our grid, then we have changed the fuel mix of our energy. We would be using more renewable resources,” Potter said.

“The next seven years of my career were dedicated to trying to figure out how to help customers make the transition to using more clean energy and less dirty energy.”

What Commissioner Potter learned is that if you offer customers incentives, education and technologies that help control when their appliances use energy, they are willing and able to participate in the clean energy future.

“Give customers a discount on their energy use during the day, with some home automation like Alex and Nest thermostats, and it is easy for them to save money and use clean energy.” she said. “This is a significant part of my vision for Hawaii – to empower our residents to use clean energy and conserve energy where they can, without being inconvenienced. The Hawaii Electric Company (HECO) is working hard to bring renewable energy online, and we, as customers, have to do our part, too.”

Commissioner Potter continued, “The PUC recently approved Maui Electric Company’s (MECO’s) purchase power agreement with AES Renewable Energy for 60 megawatts of solar power and 240 megawatt-hours of battery capacity. MECO will pay eight cents a kilowatt hour from the solar array and battery system, the lowest cost for renewable energy on the island and much lower than fossil-fuel-generated power. The goal is to replace the Kahului Plant, which is the dirtiest and least efficient fossil fuel plant in Hawaii, with this clean energy. The solar and storage facility can produce enough energy for nearly 27,000 Maui homes at a fraction of the cost of the Kahului plant. Not only do customers get clean energy, that energy is much cheaper.”

That said, while MECO can bring the clean energy resources to the grid, customers need to help manage their energy use, so they are using the majority of energy when the solar is produced.

For example, if you have an electric vehicle, charge it during the day so that you are using clean electrons. Use a timer for your dishwasher and pre-cool your home. Buy efficient appliances, like Energy Star, and check with Hawaii Energy for rebates and programs that can lower your electric bill.

“We all have to work together to get to a 100 percent clean energy future, both the utilities and the customers,” Potter said, noting the announcement of the landmark Memorandum of Understanding (MOU) between Hawaii and California.

“The California and Hawaii PUCs will now officially collaborate to address climate change, reduce the use of fossil fuels and greenhouse gas emission,” she said. By entering into a MOU, staff at each commission will undertake actions within their mandate to further these goals. This was a remarkable opportunity for the Hawaii PUC to make a strong public commitment to reducing carbon emissions and accelerate clean energy in our state. I am honored to have worked on the MOU.”

One of the most important issues in front of the Hawaii PUC right now is Performance Based Regulation (PBR), an approach to utility regulation designed to strengthen utility performance incentives.

The term “PBR” is synonymous with incentive regulation. Legislation was passed in 2018 that directed the PUC to implement PBR by 2020 that breaks the link between utility revenues and capital investments.

“The commission has been working closely with stakeholders, consumer advocates and the utilities to define a set of goals, outcomes and metrics that will replace the cost-of-service and rate-based regulatory model of cost recovery for the utilities,” Potter said.

“These goals include: enhance the customer experience; improve utility performance; and advance societal goals. The outcomes include efforts like reducing greenhouse gases, using distributed energy resources and investing in an efficient grid.”

Commissioner Potter concluded, “The current regulatory model encourages companies to make large capital investments to earn a return. Our efforts will break that link, so that utilities can earn a return on providing services and programs instead of just capital investments. We must think of a broader set of regulatory mechanisms that allow the utility to move with flexibility and accelerate our path to renewable energy. Regulation is where the rubber hits the road. How we perform our function as the PUC must improve the utility and align utility performance with community interest.”